Roman Catholic Cathedral of St Mary and St Boniface
45 Cecil Street
Stonehouse
Plymouth
PL1 5HW
The Cathedral is at the corner of Wyndham Street West and Cecil Street, between the main North Road West and the A388 Western Approach.  From Union Street in the city centre turn right into Octagon Street leading into Anstis Street.  Then turn right into Wyndham Street.  A clear landmark for the Cathedral is the tall spire on the tower over the North Porch, two hundred and five feet in height.  The Railway Station is within walking distance of the Cathedral.  There are several local buses.  Cars may be parked in the car park at the rear of the Cathedral, or in the Western Approach public car park a short walking distance away.

The Cathedral is dedicated to Our Lady and also to St. Boniface, Bishop and Martyr, and also the Patron Saint of the Diocese of Plymouth.

When the main door of the Cathedral is locked entry can be gained through the north door on Wyndham Street West.  The North door leads to the Sacred Heart Chapel.  Music enthusiasts will find the Cathedral organ interesting.  It was built by Elliott in 1799, originally for the Church in St. Martin-in-the-Fields and used by the famous composer Handel.

Once inside the Cathedral there is much to involve the eye and the soul in this 'Mother Church' of the Diocese.  The slender columns and pointed arches, the very high clerestorey windows which emit a quality of transparency and peace.  Over the Chancel the painted ceiling panels are worth noting.  There are many beautiful stained glass windows for perusal, depicting a multitude of popular saints, including St. Francis of Assisi, St. Joseph, St. John the Baptist, St. Edward the Confessor, St. Brigid, St. Oliver Plunkett, St. George and St. Patrick.

The Chapel of the Blessed Sacrament is located near to the South door and has an intricately carved alabaster altar, decorative canopy, ornate wrought iron screen and thoughtful crucifix: a stately shrine for the Holy Eucharist.

The West wall of the nave encloses a most dignified epic in stained glass: the 'Boniface Window', illustrating fifteen scenes from the daring saintly life!  Stations of the Cross, on the walls of the north and south aisles were carved by Josdeph Cribb of Ditching (1958) out of stone from the quarries at Beer.  The same quarries supplied stone for Exeter Cathedral centuries ago.

The Lady Chapel, in the Sanctuary, behind the High Altar, also contains magnificent stained glass, and there is a very fine carved reredos beneath Our Lady's statue.  The stained windows portray the fifteen Mysteries of the Rosary: the whole history of salvation from the announcement of Christ's birth to Mary, to the ineffable joy of heaven united with Him.  The glorious blue tones of glass, "Mary's colour" predominate and enhance the chapel with its calm appeal to meditate and pray.

The Cathedral was designed by Charles and Joseph Hansom (of Hansom Cab fame).  It was opened on the 25th of March, "Lady Day", 1858.  Remarkably that was the very same day that St. Bernadette heard the Lady say "I am the Immaculate Conception", in Lourdes.  The Cathedral is dedicated to Our Lady under that title.  The Cathedral building was founded by Bishop William Vaughan.  He was the nephew of Cardinal Thomas Weld of Lulworth (Dorest) and the uncle of Cardinal Herbert Vaughan, the founder of Westminster Cathedral.

Over the year's the Cathedral has undergone a number of changes, the most recent being in 2015/16 when the seats were moved back to face the altar, the Ambo was moved so that it now sits next to the altar, and the Baptismal Font was moved to a more prominent position directly in the entrance to the Cathedral. 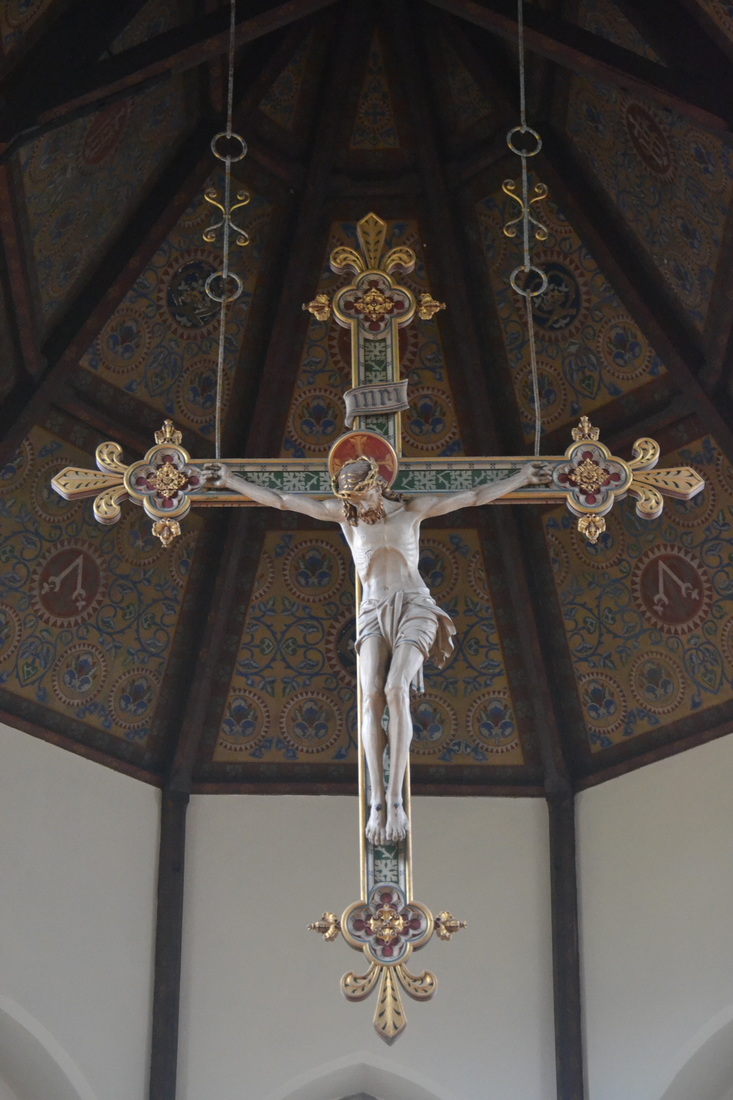