Relics of St Bernadette of Lourdes

​Relics of St Bernadette of Lourdes 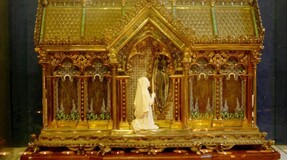 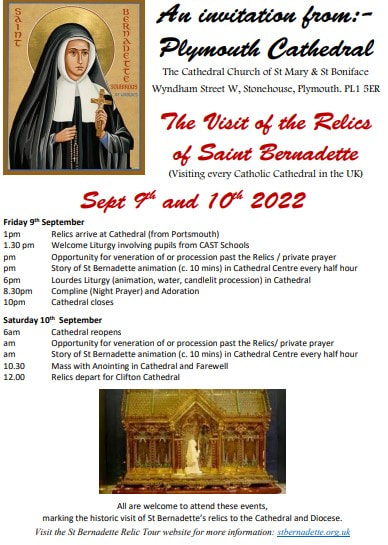 Who Was St Bernadette?

Encountering the Relics of St Bernadette

Encountering the Relics of St Bernadette
In September and October this year, the relics of St Bernadette will journey on pilgrimage to England, Scotland, and Wales for the very first time. This very special once in a lifetime event will provide an opportunity for people of all ages and backgrounds to experience the special gifts and charisms of Lourdes,

The relics of Saint Bernadette will travel from the Upper Basilica in Lourdes to every Catholic Cathedral in the UK arriving in Plymouth on the 9th September.

St Bernadette’s Story
St Bernadette was born in 1844 in a small town in France. Bernadette Soubirous was one of eight children born into a very poor family. Although initially unremarkable, Bernadette’s life was to inspire generations of people to journey in faith on pilgrimage to Lourdes.

Between 11 February and 16 July 1858, Bernadette saw the Virgin Mary eighteen times in a series of Apparitions that took place in cave on the outskirts of Lourdes, a place now known as the Grotto of Massabielle. In the course of these miraculous encounters, Bernadette, then aged just 14, became the friend and confidante of Our Lady, the mother of Jesus.

The Apparitions of Lourdes were authenticated in 1866 by the Bishop of Tarbes. In that same year, Bernadette left Lourdes to live out her religious vocation within the community of the Sisters of Charity of Nevers. She died in 1879, was proclaimed blessed in 1925, and a became a saint in 1933.

An article by REV. CHARLES MANGAN
Some people think the Catholic Church abandoned her teaching on relics after Vatican II. However, a quick glance at the Code of Canon Law, published by authority of Pope John Paul II in 1983, reveals that the Church very much considers sacred relics to be important and significant in the life of the Church (cf. canons 1281-89). Just what are relics and what meaning do they have for disciples of Jesus Christ?
​

Just what are relics and what meaning do they have for disciples of Jesus Christ?
The word relic comes from the Latin relinquo, literally meaning I leave, or I abandon. A relic is a piece of the body of a saint, an item owned or used by the saint, or an object which has been touched to the tomb of a saint. Traditionally, a piece of the body of a saint, especially that of a martyr, may be with the permission of the local ecclesiastical authority used in solemn processions recalling the specific holy person.
It may seem strange that Christianity, which so adheres to the belief in the resurrected body after the final judgment, should attach veneration to body parts of the faithful departed. But as Dom Bernardo Cignitti, O.S.B., once wrote, In a religion as spiritually centred as Christianity, the remains of certain dead are surrounded with special care and veneration. This is because the mortal remains of the deceased are associated in some manner with the holiness of their souls which await reunion with their bodies in the resurrection.
Venerable history
The veneration of sacred relics has a long history in the Church. It is commonly held that the first account of such veneration stretches back to the martyrdom of St. Polycarp, bishop and martyr, who was killed by being burned at the stake in the amphitheatre at Smyrna around the year 155 A.D. One such reference, which comes from the Office of Readings assigned to the memorial of St. Polycarp (February 23) in the Liturgy of the Hours, states: When the pyre was ready, Polycarp took off all his clothes and loosened his undergarment. He made an effort also to remove his shoes, though he had been unaccustomed to this, for the faithful always vied with each other in their haste to touch his body. Even before his martyrdom he had received every mark of honour in tribute to his holiness of life.
The Fathers of the Church take up the theme of the reverence paid to the sacred relics as early as the fourth and fifth centuries. By the 1100s, relics were being venerated in churches and shrines which attracted numerous pilgrims.
As time went on, the clothing and personal effects of holy men and women and boys and girls of the Lord were also enshrined. Abbot Cignitti observed: This was because of the widespread belief, beyond measure in the centuries of the early Middle Ages, that the wonder-working power of the saint was to be found not only in the entire body but also in every part of it and in objects that had been in contact with his person.
After the death of Emperor Constantine (fourth century), cases of wood, ivory, and various metals containing relics were deposited in altars at the time of their dedication or buried near the tombs of the dead or even worn around the neck. It is well-known that altars at the time of their consecration by the bishop were to have inserted a relic of a saint, preferably a martyr, which was kissed by the priest as he began to offer the Holy Sacrifice of the Mass. It is still earnestly recommended that every altar possess a relic of one of the saints.
First-class doctrine
There are three classes of sacred relics. The first-class is a part of the saints body. (It is this type which is placed in an altar stone.) The second-class is a piece of the saints clothing or something used by the saint, while the third-class is an object which has been touched to a first-class relic.
Isn’t the veneration of relics optional for Catholics? Must the Catholic faithful really esteem the bodies of the saints? Once and for all, the Council of Trent (16th century) responded to the claims of the reformers that both the veneration of the saints and their relics is contrary to Sacred Scripture. The Council taught: Also the holy bodies of the holy martyrs and of the others who dwell with Christ . . . are to be honoured by the faithful.
There are several scriptural passages that support the veneration of relics. For example, the Israelites took Josephs bones when they departed Egypt (Ex. 13:19). The bones of Elisha came in contact with a dead person who then was raised to life (2 Kings 13:21). The same Elisha took the mantle of Elijah and fashioned a miracle with it (2 Kings 2:13). The Christians of Ephesus, by using handkerchiefs and cloths touched to St. Pauls skin, effected the healing of the sick (Acts 19:12).
Communion of saints
To venerate the relics of the saints is a profession of belief in several doctrines of the Catholic faith: (1) the belief in everlasting life for those who have obediently witnessed to Christ and His Holy Gospel here on earth; (2) the truth of the resurrection of the body for all persons on the last day; (3) the doctrine of the splendour of the human body and the respect which all should show toward the bodies of both the living and the deceased; (4) the belief in the special intercessory power which the saints enjoy in heaven because of their intimate relationship with Christ the King; and (5) the truth of our closeness to the saints because of our connection in the communion of saints we as members of the Church militant or pilgrim Church, they as members of the Church triumphant.
The relics of the saints and their veneration is just another in the long line of treasures which Jesus Christ has given to His chaste bride, the Church. These relics summon us to appreciate more profoundly not only the heroic men and women, boys and girls who have served the Master so selflessly and generously, but especially the love and mercy of the Almighty who called these His followers to the bliss of unending life in His eternal kingdom.